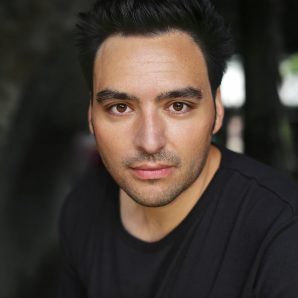 Click above to watch the video message from Dan-de-Cruz

Dan gained a BMus (Hons) from the University of Surrey before going on to train on the post-graduate course at Guildford School of Acting.

Dan has worked extensively around the UK as a Musical Director, most recently on Just So at the Watermill Theatre, Beauty and the Beast at the City Varieties, and MD/Arranger on the SAME Voices Unite “It Means Beautiful” charity release, which was nominated for an Asian Creative Media Award.

Recent work includes: Benny and the Greycats (Workshop), MD on Little Red Riding Hood at City Varieties in Leeds, Show MD and Baptiste on Kiss Me, Kate! at The Watermill, MD on Jack and the Beanstalk at Colchester Mercury, MD on Return to the Forbidden Planet at the Eastbourne Theatres, MD on Our Blue Heaven at the New Wolsey Theatre, MD and arranger on Justin Fletcher’s new show – Justin’s Band, UK No.1 tour of the hit musical, Jackie – The Musical, Beauty and the Beast at the Queen’s Theatre, Assistant Musical Director for the critically acclaimed production of Made in Dagenham at the Queen’s Theatre/New Wolsey Theatre, and Musical Director & Orchestral Arranger for Aladdin at the Queen’s Theatre, Hornchurch, which was voted one of the Top Ten Shows of 2015 in London Theatre 1, Seussical the Musical, Chicago, The Wedding Singer, On the Streets, Little Shop of Horrors, The Dracula Spectacular, FAME, Back to the 80s, The Pirates of Penzance, Annie, Guys and Dolls, The Wizard of Oz, Jesus Christ Superstar, Joseph and the Amazing Technicolor Dreamcoat, Oliver!, The Mikado, A Christmas Carol, Captain Noah, The Evacuees and Sago the Clown.